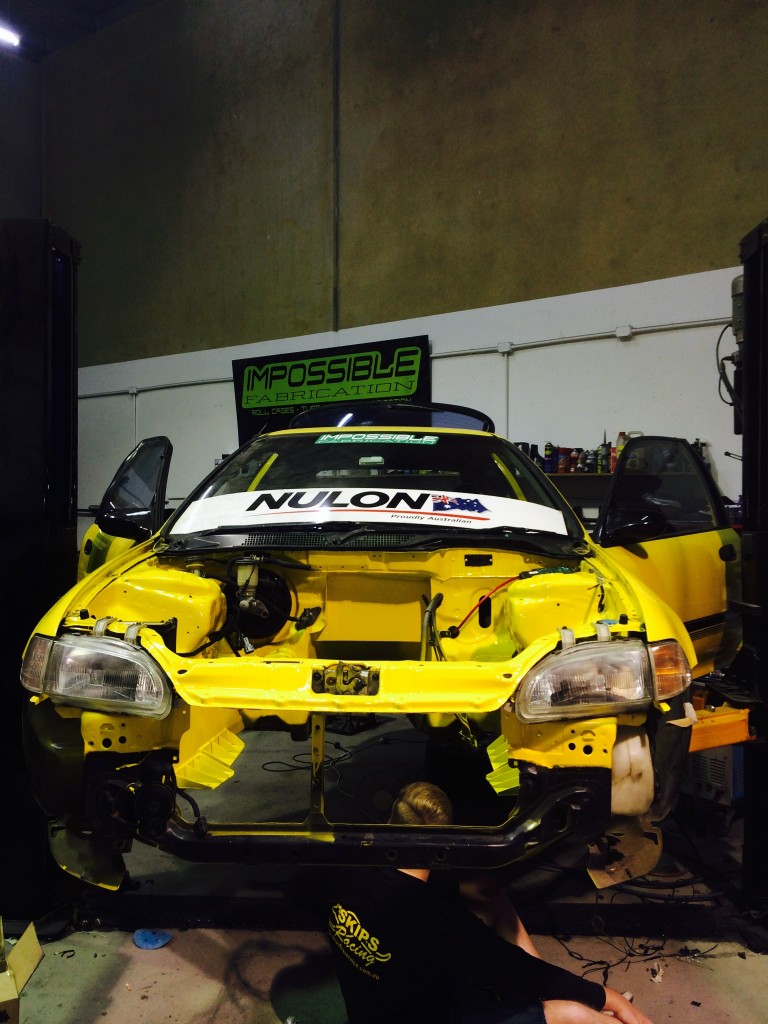 ith under a week to go we had to really start pulling our finger out and build this Civic. We had about 5 days to finish the build and about 3 months work of work to do.

The front and rear ends were tacked in so the next step was to fabricate a tunnel and firewall, not only was this going to give us the room for our drive shaft and gearbox but it was also going to play a major part in strengthening the chassis, Civics are not meant to be RWD so the chassis needed some love to be able to withstand what we are going to throw at it.

Once we tacked the tunnel in it was time to bolt everything back in to make sure we had the clearance needed, and nothing touched. Using a custom one piece drive shaft saved us alot of time (and money) we had to extend the current 2 piece shaft by 55mm which doesn’t seem alot but to think that the Civic wheelbase is LONGER than S15 keeps spinning us out.

Some things are meant to be… Would you believe that the 200sx steering rack more or less bolted in. Grub worked his magic on a donor column and we managed to get it to bolt up to the civic body. Tick one more thing of the “to do list”

Next up was the firewall, We needed to make sure that we had enough room on either side, while still maintaining the factory look from the outside. It also meant that we have to relocate our brakes and clutch as they used to run behind the motor.

We cant give away all our secrets, but once we finished the firewall it was time to give the whole engine bay a once over, Joel and Grub worked through the night to get this engine bay sorted, cleaning all the holes up, smoothing it all out, Joel even used the factory sealer along the joins to give it the Factory Honda (ish) look. Not bad for a 3:00am finish.

One engine bay ready to accept the SR20 it was built for. The bay looks great, this is whatr you get when you spend the time and get every last corner of the bay ready before painting. We decided to paint the engine mounts black again as it would match the motor much better. Now for the exciting part. We get to start bolting things on for the final time.

This photo just goes to show you how much work went into the front end of this car, Grub fabricated , filled and strengthened new chassis rails. This is the finished product. Joel wasted no time, mounting the brake booster, battery, headlights and wiring, we also started running the engine loom and fuel lines.

Fuse box is in, Those 200sx shock towers look factory, Impossible Fabrication did an incredible job making this car look as neat as possible.

Brendo got a new haircut and decided he was going to help. Thanks mate, couldn’t of done it without you.

We run GKtech fans on all our cars and the civic would be no different. 50% more airflow would help greatly as we are running the front mount cooler inside the front reo. it took about 2 minutes to install and looks heaps neater than factory item as well. These fans might look like that dont do much, but we get 20% cooler water temps when using it. Its a must buy for any SR.

New fan fitted, it was time to mount this baby in its final resting place.It was alot easier to keep it all together, but did take 3 guys to line up the suspension, engine mounts and gearbox mount. Lucky at this stage in the build we couldn’t keep people away.

Like a glove..  The engine bay looks amazing with paint and removal of the old mounts… now its time to start bolting it all together and see what happens…

Stay tuned for the next blog, it might involve a civic getting kicked out of an airport for doing burnouts…